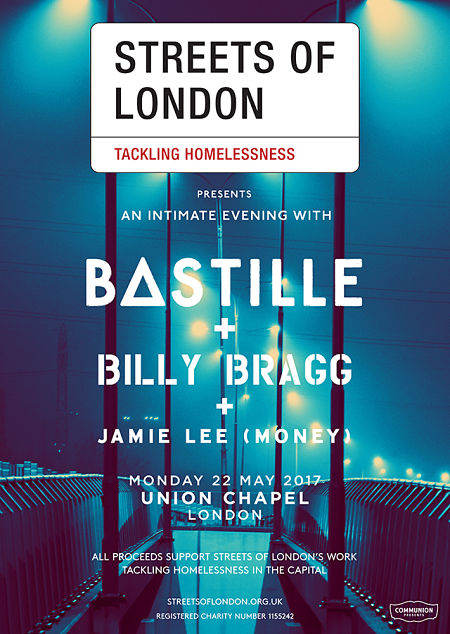 The band performed a unique stripped-back set with a string quartet at the 900-capacity venue. Support came from Billy Bragg, a musician who has long associated himself with social justice, also Jamie Lee (Money). Folk singer Ralph McTell, who wrote the song 'Streets Of London' (which gives the charity its name) made a surprise guest appearance during Billy Bragg's set to sing it with him as a duet.

As an Ambassador of the charity, Dan Smith of Bastille shared: “We are beyond excited to be playing this special one-off show at The Union Chapel in support of Streets of London. I’m honoured to be an ambassador for this charity and try to help champion the life-changing work they’re doing amongst the homeless and vulnerable in London. We’re so excited to be playing a show alongside the incredible Billy Bragg who we admire so much, at a venue that we’ve always wanted to play.”

Speaking about the event, Streets of London Director Ian Steuart Fothringham shared: "The number of people sleeping rough in London has nearly trebled in the last ten years. These are some of the most vulnerable and marginalised people in our society, and it’s vital that they can access the support they need to get off the streets. Streets of London provides funding to projects that give homeless people the support they need to turn their lives around. We’d like to say a huge thank you to the artists for supporting our work and helping to bring attention to this important cause."

It was a fantastic evening and raised roughly £20,000 for the homelessness projects we support. Thank you to all the artists who generously gave their time and talents for free, and to everyone who bought a ticket or entered the ballot.

You can read a review from The Independent HERE.

Click HERE for a few photos of the event. All photographs thanks to Si Brandon Photography.