In March 2014, we held a charity auction on eBay that raised valuable extra funding to support homeless people in London.

More than 30 major bands and solo artists – including some of the biggest names in music – lent us their support by signing Streets of London T-shirts or donating other signed memorabilia especially for it: 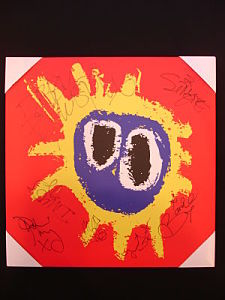 Items included a signed presentation disc of Coldplay’s 'X&Y' album, Streets of London T-shirts signed by The Rolling Stones, The Killers, Noel Gallagher, Paul Weller, The XX, Band Of Horses, Atoms For Peace, Bastille and Biffy Clyro, signed Florence and the Machine and Alt-J T-shirts, a signed canvas of Primal Scream’s ‘Screamadelica’ artwork and a signed copy of The National’s 7-inch single ‘Think You Can Wait’.

Justin Young from The Vaccines said: “After the bad weather of the last few months, more than ever is it easy for me to appreciate just how tough and awful living on the streets without structure and support is. And I think whatever people can do to contribute to making the lives of those people easier goes an incredibly long way.”

Thanks to everyone who placed a bid - your support makes a real difference!