STREETS OF LONDON CHARITY AUCTION - SIGNED T-SHIRTS AND MORE FROM THE BIGGEST NAMES IN MUSIC!

In early 2018, we held a special auction on eBay, with more than 50 of the BIGGEST names in music generously lending us their support by signing T-shirts or donating other signed items: 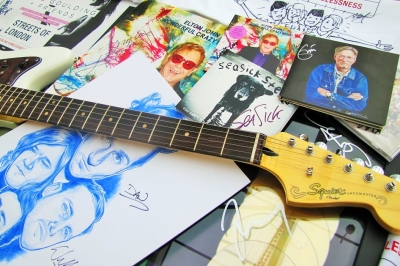 There were lots of big names represented, with T-shirts and other items signed by The Rolling Stones, Ed Sheeran, Mumford & Sons, The XX, Rudimental, Paul Weller, Noel Gallagher and many more. Items included a signed presentation disc from Coldplay and an Olympic White Squier Jazzmaster electric guitar signed by Foals.

Also included were a number of items from Streets of London gigs, ranging from a pair of limited-edition show posters signed by Ellie Goulding, to limited-edition artwork signed by Bastille at the Union Chapel in May, as well as a signed T-shirt and album bundle from the gig Seasick Steve played in support of Streets of London at the Electric Ballroom, where he was joined onstage by Led Zep legend John Paul Jones.

The auction raised more than £8,000, to support Streets of London's work funding projects that ensure homeless people are able to access the advice and support they need to get back on their feet. A big thank you to all the artists who donated signed memorabilia and thank you to everyone who placed a bid!