‘WE WERE ALL 10 ONCE’ SHORT FILM FEATURING ELLIE GOULDING, DAN SMITH, JUSTIN YOUNG AND MORE

We’re proud to present 'We Were All 10 Once', a short film featuring Streets of London’s ambassadors Ellie Goulding, Dan Smith (Bastille) and Justin Young (The Vaccines). Also appearing in the film are Tom Odell, Frank Turner and a number of people who are currently homeless.

Streets of London Director, Ian Steuart Fothringham said: “The film shows that whether you’re a famous musician or you’re homeless, we all have the same dreams and ambitions. We want to challenge the perception that those who end up homeless are any different from the rest of us.”

“Everyone has a story - a childhood where they dreamed of who they would be when they grew up, and we all have hopes and dreams for the future too. When someone becomes homeless, it doesn't mean they stop being that person. Homelessness compromises people’s basic dignity, and it can be incredibly damaging, but with the right support, people can make a fresh start and get their life back on track.” 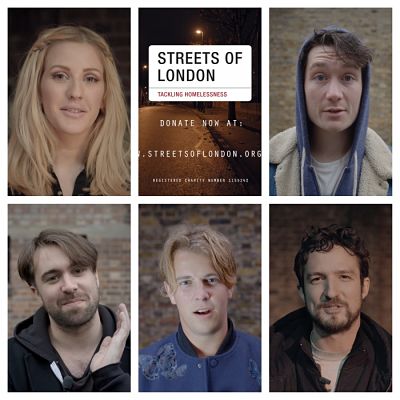 “We would like to say a big thank you to Sunshine Pictures, Picture Imperfect, all the artists and the guests of Shelter from the Storm who appear in it. We really appreciate everyone’s generosity in giving their time and talents so freely in support of this important cause.”

Ellie Goulding said: “Tragically, rough sleeping is still on the rise. The number of people sleeping rough in London has more than doubled in the last 5 years and nearly trebled in the last 10 years, with an increase every single year. Streets of London makes sure that your money gets to where it’s needed most, funding some amazing front-line projects at some of the best smaller charities.”

Dan Smith said: “I think homelessness is something that a lot of people just aren’t really that aware of, and it’s really great that Streets of London are doing good work to raise awareness and to put money into helping homeless people.”

Justin Young said: “People who are homeless are some of the most vulnerable and marginalised people in our society, and it’s vital – particularly as temperatures start to plummet as Christmas approaches - that they can access the support they need to get off the streets. Streets of London provides funding to some amazing projects that give homeless people the support they need to turn their lives around.”

Tom Odell said: “Streets of London feels very important to me because it feels like a needless thing to ever have anyone on the street. Money and help from the government or from a charity can help to solve the situation of someone sleeping rough. I just hope that more people start doing more for that. If you can, please donate to Streets of London.”

Frank Turner said: “I’m happy and proud to be associated with Streets of London. I think that homelessness is something of a disgrace in a wealthy society, and I think that the work they’re doing is fantastic. It’s great to be involved and you should get involved too.’’

If you’d like to help us fund some amazing projects that give homeless people the support they need to turn their lives around, please make a donation HERE.

Thank you very much for your support!